How does one learn to sing those seemingly super-low tones? Some people are as obsessed with low notes as they are with the high ones. For whatever reasons, the extremes of anything are attractive.
Vocal infrasonics can be heard in various traditions: the yang chanting used ritually among some branches of Tibetan Buddhism; the folk music and throat-singing of Tuva (kargyraa) and Mongolia (kharkhiraa); the liturgical music of Sardinia (in the tenore bass voice): alongside the umngqokolo overtone singing of Xhosa women; and either occasionally or continuously in the epic songs of the Altai, Khakassia, and Sakha Republics.
But the ability to produce subtones is inherent in the human vocal apparatus; consequently, this vocal technology also arises spontaneously and radically, which is to say, devoid of roots in any of the above-listed traditions.
I used to tell people that to sing subtones they simply had to hit "second puberty". Though the joke has since grown tiresome, there is truth to the onset of a lesser known secondary pubescence. At about the age of 26 years, the human brain typically ascends to another plateau of cortical development, whereby the pre-frontal cortex fully matures. Think back (or forward) to your twenty-sixth year or when-a-bouts. What was happening at that time? How did you feel? Anything change?
Perhaps at twenty-six your voice didn't start to sound like a chainsaw at the bottom of a well, but still, maybe we should rethink the concept of only one puberty, only one turning point in the ongoing development of the remarkably intelligent organism that is human body.
Overtones and Undertones
Overtones exist. There is a clearly observable and measurable series of harmonic overtones that is inherent in periodic sound vibration. Overtones go over the main note, but is there a series of tones that go under the main note?
Is there an undertone series?
In formal acoustics, the undertone series remains a theoretical construct, not an actual acoustical phenomenon. To date, no one has produced evidence of an undertone series, a true mirror inversion of the overtone series that sounds simultaneously with the fundamental frequency (With singing, the fundamental is the actual note sung by the vocal folds).
What is that low tone if it is not an undertone? I prefer to call it a vocal subtone, as it is caused by the oscillation of tissues that lie above the vocal folds. We use the vocal folds for everyday speech and song. The tissues above these actual focal folds are known as the false vocal folds, and you can see them on the diagram below, which is a cross sectional view of the larynx. 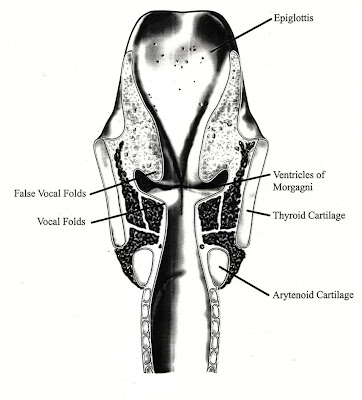